The Deadpool Mindset: How Embracing Your Death Will Elevate Your Life

by The Pop Mythologist

Life is an endless series of train wrecks with only brief commercial-like breaks of happiness. This had been the ultimate commercial break. Which meant it was time to return to our regularly scheduled programming.  — Me (Deadpool, 2016)

Yes, Wade W. Wilson. The Merc With the Mouth. Fondler of Wolverine’s Balls. The hottest thing in cinema since Jean-Claude Van Damme’s ass in Bloodsport.  And in this article I’m going to share some of the secrets of my success with you, the secrets of how I manage to dice people into itty-bitty parts and blow them to smithereens with such stunning success on a regular basis—and how, even though I get the living s**t kicked out of me on a regular basis, I just keep coming back. And how, even though I’m a deranged lunatic, I somehow even manage to help some people in the process.

As my fans know, my identity is, uh, malleable to say the least. And today there’s a voice in my schizophrenic brain belonging to some dude called the Pop Mythologist, and he’s putting words in my mouth (I oughta stick something in his mouth).

Boys and girls, I’m not here to make you laugh or gasp in awe at my physical prowess. I’m here to tell you how to be like me in the best way possible, the only real way possible—’cause who doesn’t want to be like me?—and it doesn’t involve killing people in gratuitously gory ways.

A lot of people have a lot to lose. They spend a whole lot of time working hard to create, build, and acquire a lot of things. They have nice, big jobs with nice, big titles; nice, big houses filled with lots of nice, big things; and wives and husbands with nice, big… er, phones. And hey, there’s nothing wrong with that. You want that, knock yourself out.

But what happens when you have a lot? You’ve also got a lot to lose. There’s nothing wrong with that either, but what happens when you have a lot to lose is that you’ll have a lot of fear and anxiety. With gain comes the fear of loss. And as someone who has lost a lot, trust me, that fear is warranted. The danger of losing things you’ve worked hard to acquire is a very real one. God may giveth but dude’s an Indian giver.

Another mark of those who have a lot is that they never stop wanting more. They always fear not having enough or losing what they’ve gained. Is that a universal rule? No, the only universal rule is how sweet my ass looks in a close-up. Besides, I know a few rich jokers—guys like Professor X and Iron Man—who are all right, I guess, and who use their money to help people and stuff. But as a general principle, for most average people, anxieties don’t go away with the acquirement of status and things. They increase—for the reasons I’ve mentioned, and more.

The results of being filled with this kind of constant anxiety of loss are manifold: poorer decisions, less efficacy in taking action that should be focused and bold, self-centeredness, and lack of compassion. I could go into detail about all of these things but just trust me when I say that, in short, the chronic anxiety of loss will make you suck. And if there’s anything that I, Deadpool, do not ever do it is suck. I get sucked but I never suck.

“But Wade,” you say in your most annoying, bratty voice, “you’re a ruthless mercenary. You don’t care about people! You’re motivated by money!”

To which I say, in my decidedly sexy, masculine voice, “Oh, yeah? Well, some fan of me YOU are! I guess you haven’t read Uncanny X-Force #5, have you?” 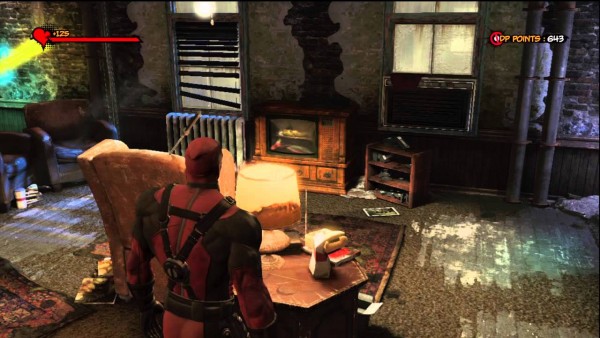 The Deadpool Mindset is all about having nothing to lose. Now, if, like me, you really do have nothing to lose, then congratulations. You’re already there. But if, like most, you’ve got plenty to lose, there’s a way you can still tap into the Deadpool Mindset. Truth be told, even for those of us who feel like we’ve lost everything, there’s always more to lose. For instance, I lost the life I had dreamt of, my beautiful face, my hot girlfriend, but there’s still more I could lose even now—my healing factor, my guns (“from my cold dead hands!”), or this hot ass of mine that makes all the ladies, and a lot of the guys, swoon.

So the Deadpool Mindset is not about literally having nothing to lose so much as it is a mentality. But before I tell you how to adopt this mentality I’m first gonna convince you why it’s desirable to adopt it in the first place from time to time.

Read this: The Complete Guide to Not Giving a F**k

Fear, at its best, is actually a wonderful evolutionary tool. Our ancestors, when in danger (which was often), needed to be able to run fast and fight hard, and fear was the biochemical process that made this possible.

But chronic anxiety, the kind that constantly buzzes underneath your peripheral awareness, the kind that makes you constantly afraid of losing what you have, of not having enough despite already having so much, is the opposite: it is an energy drain. It makes you, in essence, conservative (and I don’t mean politically though that might indeed be the case for some). When you make an effort at something you will hold back, consciously or not, out of fear of losing something. Informed caution is good, but once you decide to go for something you need to go all the way. The anxiety of loss will also make you hoard the tacos you already have and not share them out of the fear that there won’t be enough for you. Both of these things suck.

Look, let’s get this straight, goofballs. I’m not endorsing abject poverty or destitution. A man’s gotta eat tacos, and a man’s gotta have his space to store his nudie mags. But once you have those things the real joy in life comes in sharing them, which is the other problem with the anxiety of scarcity and loss: it deprives you of this joy. I once gave some nudie mags to Kid Apocalypse and lemme tell ya, there ain’t nothing like that feeling, not even the feeling of… er, never mind.

All right, then. Here, finally, is how to tap into the Deadpool Mindset: 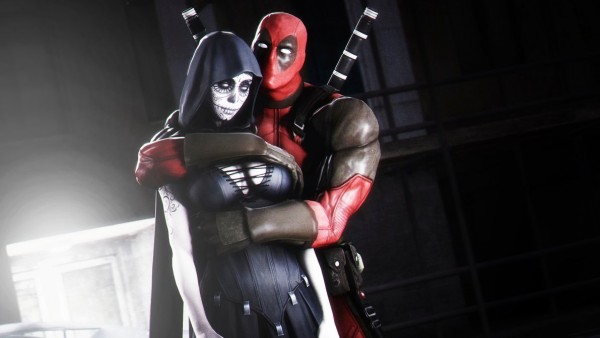 Learning to embrace the omnipresence of Death like I have will free you to truly live. (Activision / High Moon Studios)

Look at the picture above. This here is my sweetheart Death. Sooner or later she will come and take everything from you. Everything. The career you’ve built, the status you’ve attained, the things you’ve accumulated—even your loved ones and, finally, your life. And you won’t be able to take anything with you. Trust me, I know quite a lot about Death because I fell in love with her, after all. And once she takes you it won’t matter for squat how successful you were or how long you lived. What’s the success of even a Steve Jobs in the face of oblivion? What’s seventy, eighty or even ninety years of finite life in the face of infinity?

Once Death takes you, are you going to remember how successful you were or how long you lived? Is it going to make the experience any different? When you’re in deep sleep do you remember anything about how well your day went or how many burritos you ate? Whether you realize it or not, from the perspective of infinity, or even just the 14 billion years of the universe, in a very real sense you’re already as good as dead.

I want you to really, really think about this and to vividly imagine Death taking your precious things from you one by one, leaving you with nothing and then eventually taking you as well. Well, s**t… that’s just depressing, ain’t it… (where’s my Prozac?!).

Oh, right, but now here’s the thing. You can’t take any of it with you but you can leave something behind: the memory of a life well lived; memories of the goodness you spread through the sharing of pancakes; the mirth of the jokes you told; the smell of the farts you blasted. The more you give, the better the memories of you will be and the longer there will even be a world left to remember you to begin with. 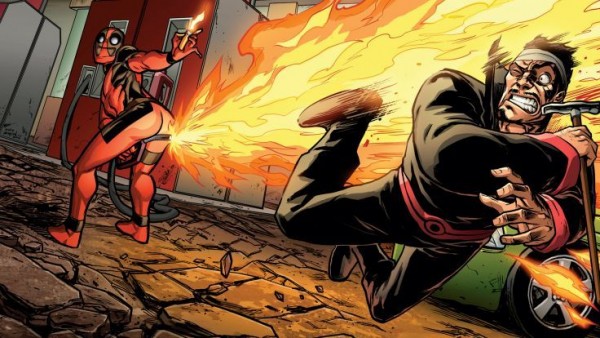 You can’t take anything with you, but you can leave something memorable behind. Get it?! (‘Deadpool’ #60 / Marvel Comics)

In summation, when you abide in a default mental state of already being dead and owning nothing, two things become possible:

When you live this way, every success becomes icing on the cake, every chimichanga a bonus, every blow—er, blow pop  a moment to savor. And you don’t cling to these moments because Death has already taken them.

This year I see my movie topping the box office. I see sales of my comics rising. I see armies of geeks dressed as me at comic cons. But I don’t see you actually being like  me in the deepest possible ways. (Will the real Wade Wilson please stand up, please stand up?)

The key to me as a character—since I am in the unique position of realizing my false existence as a fictitious invention—is that I am an embodiment of the Joker/Trickster/Fool archetype. Understanding the fickle, unpredictable tides of fortune and ruin I laugh at both. Both are ephemeral, both mean nothing to me. I am immune to the non-stop battery of insults that existence throws my way. I am here to simply enjoy the demented but also wonderful carnival ride that is life, without dependence on any outcome, and to maybe help out a few of you yahoos along the way.

I am Deadpool. I have nothing to lose. And everything to gain.

This article was originally published at Pop Mythology 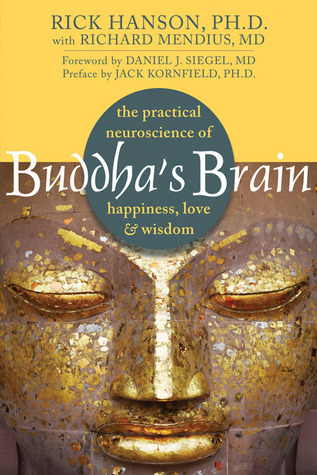 Buddha’s Brain is a practical guide to attaining more happiness, love and wisdom in life. It aims to empower readers by providing them with practical skills and tools to help unlock their brains’ potential and achieve greater peace of mind. Specific attention is paid to the contemplative technique “mindfulness” and the latest neurological findings that support it.

The Most Important Relationship You’ll Ever Have is With Yourself