Ego, Fear, and the War on Drugs

“Over one’s mind and over one’s body, the individual is sovereign.”

From the point of view of psychedelic enthusiasts, the prohibitionist stance is farcically weak. The moral imperative could not be more obvious: give up the ghost, stop jailing non-violent consciousness explorers, and give us back our tax dollars.

But let’s consider how we got here to begin with. I don’t want to talk about Nixon and the Controlled Substance Act, or the DEA, or how America has exported its neurotic drug policy to the rest of the world. I won’t even present data revealing how ineffective and dehumanizing the War on Drugs really is. That’s all been covered before.

Today, I want to examine the psychology of a culture that gives lip service to human rights, yet imprisons people for experiencing unsanctioned forms of consciousness. Why would we cage our brothers and sisters this way? Why do we put up with it, especially in a nation that paradoxically prides itself on freedoms?

This kind of questioning is so uncommon, so far removed from the everyday rhetoric of “Just say no” and other drug war propaganda, that I must make a detour to address common objections. These substances aren’t outlawed with the intent of oppressing people, argues the prohibitionist, but to protect us! The point is to reduce harm. Don’t get your hippy-dippy bell-bottoms in a bunch over this imagined “oppression of the mind.”

This argument actually has some merit—drugs get banned, at least officially, for their harms and not for the mental states they induce. And harm reduction is certainly a worthy goal of drug policy.

Harm reduction may even justify outright prohibition of some chemicals, just as the anti-drug champions argue. Imagine, for instance, a hypothetical drug which turns a user a bloodthirsty zombie, devoid of empathy and intent on murdering everybody in sight. Presumably we may be justified in banning such a dangerous drug. Although even in this extreme case, prohibition is probably still a bad policy for the simple reason that it is ineffective.

“If a drug turns my neighbors into brain-devouring zombies, I’ll be the first to vote for its prohibition.”

I’m not some starry-eyed idealist; I recognize that individuals must make concessions to ensure the safety and freedom of their fellow citizens. No right is truly absolute, and one of the toughest tasks of government is to balance the rights of all individuals. Even our dear freedom of speech has its limits—you can’t yell “Fire!” in a crowded theater, right?

The thrust of cognitive liberty is not that all drugs are good for society, nor that substances can never be legitimately banned. It’s that the desire to prohibit any drug must be weighed against the fundamental right of individuals to control their own consciousness. We have to at least recognize this right before violating it so casually.

In a democratic society, the only legitimate laws are those that make us all more free. Yet most drugs barely move the needle when weighed upon the scales of liberty. At the very least, respect for human dignity requires legalizing the psychedelics, a relatively non-toxic, non-addictive class of chemical catalysts.

Individual sovereignty over our minds and bodies is fundamental. Our courts should guard freedom of consciousness as fiercely as they guard the freedoms of speech, religion, and assembly.

Today we do not give any consideration whatsoever to the right of cognitive liberty. Most of us don’t even acknowledge that we should have a say in our own conscious experience, except for the use of sanctioned chemicals like alcohol, tobacco, caffeine, and pharmaceuticals prescribed by authorities. We don’t realize that we are handing the keys of consciousness over to Big Brother, and for the most part, we don’t really care. When it comes to consciousness, our default position is not respect for liberty, but imprisonment—of bodies and minds.

That is the cultural attitude I wish to address.

Look at the drugs we use. Except for pharmaceutical poison, there are essentially only two drugs that Western civilization tolerates: Caffeine from Monday to Friday to energize you enough to make you a productive member of society, and alcohol from Friday to Monday to keep you too stupid to figure out the prison that you are living in.

To know the nation, you must know the citizen. Consider how psychedelics affect the individual—they upend our assumptions, causing great personal transformations and periods of profound questioning. These are not the ego’s favorite activities.

It’s important to qualify the word “ego.” I use it in a mainly Freudian sense: “the organized part of the personality structure that includes defensive, perceptual, intellectual-cognitive, and executive functions” (Wiki). It is a vital but often dishonest part of Self. Many of our problems stem from the ego’s preference for defense mechanisms over honest conflict resolution. Its job is to maintain stability and structure, not to tell the truth. 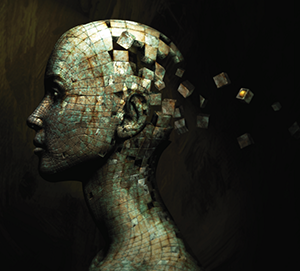 Psychedelics disassemble the machinery of self and put it back together anew. Art by David Ho.

Ego is also a timid and stubborn creature, quick to categorize opposing views and ideas as threats. Wanting to be reassured that our model of the world is an accurate one, we tend to dismiss evidence for other perspectives. This is called confirmation bias.

Psychedelics do the exact opposite, poking holes in the foundations of identity, disassembling the machinery of self and putting it back together anew. They challenge everything you thought you knew about reality. Forget upsetting the apple cart, let’s shatter it to bits and eat all the apples!

The ego likes answers—right or wrong, it doesn’t matter, as long as they can be used to reinforce an existing worldview. It is drawn to order and structure, and grows more rigid with age.

The psychedelic mind prefers questions—the deeper and more unsettling, the better. Its favorite thing to pick apart and analyze may be the ego itself. Naturally, the ego resists the psychedelic experience. They are diametrically opposite forces.

It is no different at a cultural level; in fact, the conflict is amplified. It’s no surprise that our society—a society based on doing rather than being, on productivity and problem-solving, mired in mindless materialism and ruled by vast corporate and governmental powers—should resist these drugs so vehemently. They show us our true selves. What could be more frightening?

So why do we permit this Orwellian prohibition of mental states to continue? In a word, fear. Psychedelic prohibition is a vast defense mechanism erected by the national ego.

Everyone knows the ego’s voice: cling to what you know. Seek confirmation of all that you believe and collect evidence against all other perspectives. Deny, rationalize, deceive—whatever it takes to maintain the current sense of self!

And we listen. The age-old pathology of ego worms its way through our personal behaviors and our laws, thwarting our growth as a culture. The War on Drugs is just a bad habit allowed to linger. This is what makes prohibition so insidious—that we are not outraged, but accept it as the most natural and necessary thing in the world.

We have no problem exploring some unknowns—we climb mountains, push the boundaries of knowledge with cutting-edge science, and even travel through the jet black void of space. In many disciplines we enjoy the process of discovery very much.

But when it comes to voyaging through the internal landscape of emotions and assumptions, we grow timid. Our hearts and minds shrivel up; the ego, sensing a threat, raises its hackles. We prefer cognitive dissonance to confronting the mysteries inside, even it leads us to cage people in their own minds. It would be funny if it weren’t tragic: we would rather explore outer space than inner space. We would rather chain our peers than free ourselves and step outside Plato’s cave.

Some of our greatest fears, such as change, the dark, and death, are just reflections of the One Big Fear—the Unknown. The War on Drugs is a natural manifestation of that fear, made all the more toxic by its large scale. We have codified our phobia into law. You don’t suffer from the paralyzing neurosis of fear? Well now you do; we’ve made it the official policy.

The worst part is that we’ve outlawed the very tools that can reveal this pathology and help us resolve our childlike fears. All the medicines that can make us limitless have been shelved. We embrace our most limiting tendencies—fear, irrationality, coercion—and forsake our best ones—empathy, understanding, and respect. We cling desperately to the past, to lowly human nature, when we could instead imagine ourselves in a future that transcends these petty shortcomings.

Being constrained to ordinary consciousness is like living in a country that never lets you leave. “You can take a day trip into Drunkenness or Stimulation,” warn the border guards. “Heck , you can even move there permanently. But don’t even think about visiting Oceanic Boundlessness or Blissful Non-Duality. No, no, you’ll get arrested just for possessing a ticket to those places.” 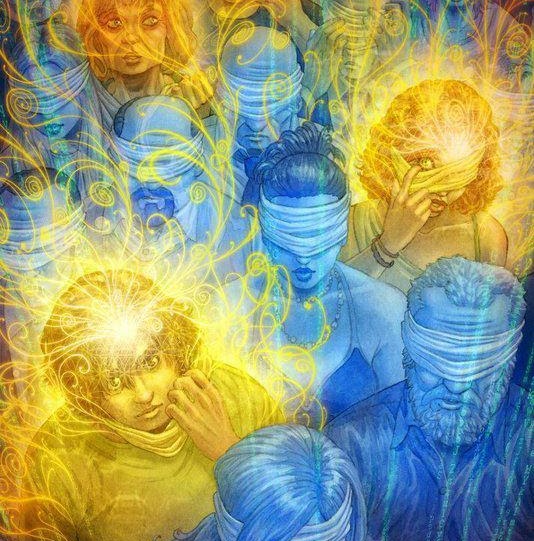 To reach such enchanting idylls you have to tiptoe across the border, and the path is fraught with danger. Must we intentionally litter the path to other states of consciousness with hazards like drug impurity and the threat of imprisonment? Is maximizing the risks associated with drug use a goal worthy of vast public expenditures? It doesn’t even matter if you love drugs or regard them with absolute contempt; prohibition is the least compassionate, least sensible, and least mature approach towards these tools of consciousness.

Repealing bad laws will resolve our state of cognitive dissonance, but it’s slow and difficult work—the cultural equivalent of admitting fault. Gosh, I didn’t mean to oppress you all these years. I really thought it was best.

In order for us to repeal prohibition, we have to admit how colossally stupid it always was. We have to acknowledge that the whole drug war apparatus, all $50 billion of it spent annually in the US alone, is a product of fear, not reason. As individuals, we don’t like to apologize; it’s even more difficult as a culture. The national ego rears its ugly head.

We will do it. We will learn to respect the basic human right of cognitive liberty. We will take these medicines off the shelf and begin using them freely to unshackle minds and hearts. We will put the rights of our fellow citizens before our own irrational fears. It won’t be easy, because it requires the truly transformative work of confronting ourselves with honesty and integrity. But we will do it. Over time, our species always progresses towards freedom.

All signs are pointing toward this psychedelic renaissance. The only question is how long it will take us.

Jiddu Krishnamurti, the Inner Revolution, and Why We Don’t Really Love Our Children