Is the "Merry Christmas" issue really even an issue?

This year especially, I’ve seen tons of comments and images in support of saying “Merry Christmas” instead of “Happy Holidays.”

But then I ask myself, “Is anyone ACTUALLY offended by people saying Merry Christmas, or are these people creating a nonexistent issue in their own minds?”

I mean, I have yet to ever hear someone actually complain about someone else saying Merry Christmas. I’ve never heard anyone say they’re offended by it. Now that’s not to say that there ISN’T reason to believe people might be offended by it, because one can easily look at commercialized, politically-correct holiday messages that say “Happy Holidays” and conclude that these companies must use that phrase to avoid offending someone of a different belief or religion. But seriously, where are all these supposedly offended people!?

Just my thoughts. Does anyone else feel this way?

Oh and I’ll end it with this: How to Respond to Holiday Greetings: 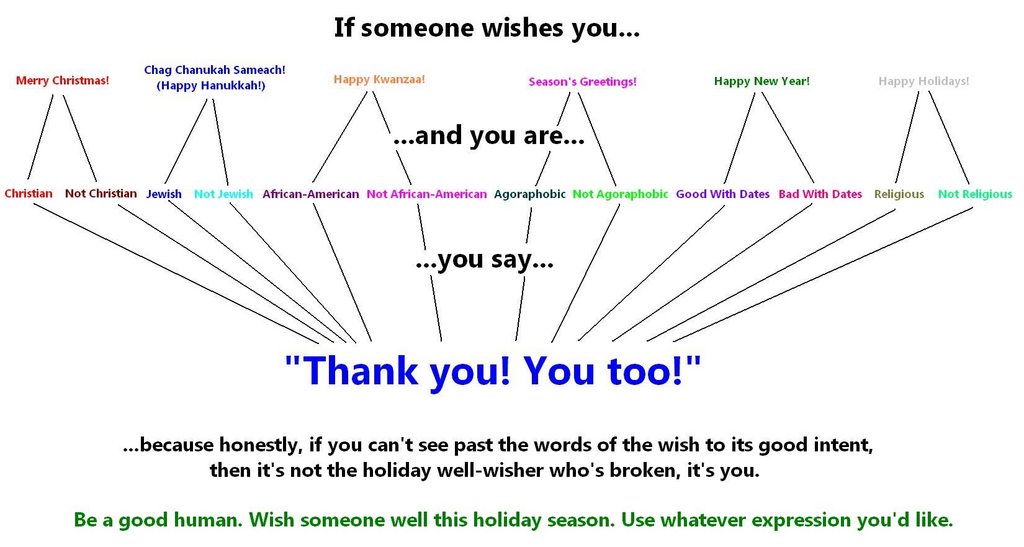 I absolutely agree with you, it is a sentiment, often it is just obligatory but often it is quite heartfelt. I believe in separation of Church and State but I do not really count myself as secular or religious, people cannot seem to just express their identity or innocently connect with people without some kind of politically correct objection to it. Threats to freedom of speech and expression seem to come more from politics than religion at this point :p

I hate the term Happy Holidays, it’s too PC.

The USA is traditionally a Christian country, and still is by and large (based on adherent numbers). People need to grow up and stop being infantilised, which is essentially what the PC movement does largely, though not exclusively).

People just need something to complain about. They want everyone to feel accepted and they think if you say Merry Christmas to someone that doesnt celebrate Christmas or isnt religious then youre offending them. Its ridiculous, say whatever you want, if someone is offended by the saying Merry Christmas, then they have some real issues.

It’s definitely creating an issue where there is none. People are choosing to take offense. Celebrate Christmas or whatever other holiday you want to, or don’t. Make your choice and don’t bash others’ choice. Simple.

PS, I would not say that I am religious, but neither would I say I’m an atheist either. Personally I prefer not worrying about any of it and just enjoying the holiday season for what it is, a time to be festive and enjoy oneself.

Yeah, no I don’t think it’s a real problem. I wished people I spoke to a ‘happy Wednesday’ yesterday, nobody gave a shit.

I see what you did there.

This is not an issue where I come from. I have a slight feeling this is really a American thing. Maybe a english speaking world thing. Can anyone elaborate? In here most of the population is catholic/christian, there are no other population-wise significant faiths.

A bit off topic but I would like to talke the opportunity and kindly ask people who happen to read this to place theirs questions geographically, unless it is really really an earth thing. I don’t mean to rude.. it is just that I think this website was not suposed to be about all-things-america, and sometimes thats just how it feels.

Living Another Life in a Recurring Dream 69

being aware of the illusion. 1

DMT THE MOST HORRIFIC HELL LOOP 9

Tips or Suggested Books on Growing or Hunting Shrooms? 5

[Official] Share and discuss your amateur poetry and stories. 564

What is Philosophy? How do We do Philosophizing? 9

Living Another Life in a Recurring Dream 69

being aware of the illusion. 1

DMT THE MOST HORRIFIC HELL LOOP 9

Tips or Suggested Books on Growing or Hunting Shrooms? 5

[Official] Share and discuss your amateur poetry and stories. 564

What is Philosophy? How do We do Philosophizing? 9